Time in the Mind

No matter how much we try to plan ahead and make to-do lists, we all seem to face the same universal struggle: There’s never enough time. Whether we can’t get enough or it can’t pass quickly enough, time is the one problem that still unites us all—like the world’s only nonrenewable resource. Once it’s gone, it’s gone, and there’s nothing we can do to change that.

But what if time, that supposedly linear, inevitable phenomenon, isn’t what we think it is? What if we could learn something which would change the way we experience time so that we could have all the time in the world? There’s just too much evidence to ignore this possibility any longer. Later in these blog posts, I’ll share with you the latest research, theories and science so you can decide for yourself. But to start slowly, here’s a mundane example we all lived through: The pandemic of 2020.

Before 2020, many of us felt overwhelmed by the pace of life. Our devices bombarded us with too much information; we felt inadequate to keep up, including unimportant news or marketing messages. As a result of the multitude of messaging, many didn’t even know how to know what was true, much less what to act on. Every week brought a tragedy or record-breaking natural disaster with the number of billion-dollar U.S. disasters in 2019 being the fourth greatest on record.[1] Paradigms were shifting for every aspect of daily life, changing how we live and resulting in new sets of rules; social media created unlimited news and access resulting in wider networks. Then, we all stopped. Suddenly under stay-at-home orders, we were unable to engage in our usual routines of shopping, work, socializing, whatever.

During the first few months, I asked people about their experiences of time and whether it had changed for them. “Yes” was the nearly unanimous answer. Before, time had passed at lightning speed. Now, according to some, time was passing so slowly that every day felt like a week. Others said time was a blur in which months passed as the same long day. Still others said both were true: every day was a week, and the weeks sped by like days. Why was time behaving so oddly? Time is not what we think.

The subjective experience of time

Fast forward to now and brief primer on time. First, time as we experience it has a physical component that can be measured by scientists. For example, the motion of a clock hand measures time, and the motion of the Earth results in 24-hour days and changing seasons. In this sense, time is our experience of moving in and around space. We physically experience time because we experience ourselves and things moving around. This is obviously true when you think about whether it is day or night in different places on Earth. It isn’t the same “time” in New York as it is in Sydney because the Earth is moving.

But there’s another component. Time can also be measured by our perception of time passing. Called “subjective time,” this aspect of time has also been studied extensively. Here’s an example we may all relate to. Most adults say that as we age, time seems to pass more quickly. Summers seem to last forever when we’re children; yet as adults, years pass in the blink of an eye.

The number of images remembered is important

A researcher from Duke University recently theorized that the reason we remember our childhood as lasting much longer than our adult life is due to the fact that our brains process images more slowly as our bodies age.[2] Because the images from when were young were processed more quickly by our more agile brains, there are more of them to remember. This has the effect of stretching out the amount of time over which we feel they occurred. Later on, when our brain’s ability to process images has degraded due to age, fewer images are remembered. This gives adults the sense that we are jumping from one memory to another quickly, as though time has sped up.

That’s a theory about how the brain processes images and remembers things, which we relate to time. But what if it’s more complicated than that? What has fascinated me is this question: Does how we show up for a situation in our minds affect our physical experience of the world, in particular, our experience of time? Up until now, from the perspective of science, most people would say that if it’s in your head, it’s not real. But the latest research in the fields of brain science, physics and yes even quantum mechanics, suggests otherwise. Research increasingly suggests there may be a way to understand the intersection where psychology meets physics. I’ll take that notion one step further: Once we know that, I’ll bet we can devise some practical tools to improve our lives in tangible physical ways. 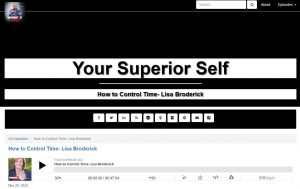 Trey Downs of Your Superior Self Interviews Lisa Broderick, author of All the Time in The World. https://yoursuperiorself.libsyn.com/how-to-control-time-lisa-broderick 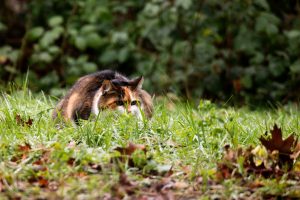 Haven’t you ever wondered, what is time?  Why does time pass?    One theory is that time exists because thing move around.  We experience time because we move around.  Another theory is called entropy.  This is the second law of thermodynamics, which says that physical things always go from a state of order to a state of decay 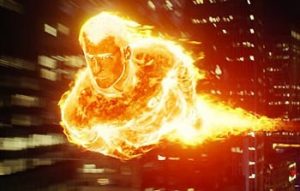 Getting Your Power Back

I hear a lot these days about having power, getting your power back, and being powerful. In some sense, this is exactly what we should be doing. And in another sense, it is a pretty limited view of reality. I think of power in terms of personal power—which means focus and being in alignment with