The Brain on Slowed-Down Time

Experiences of slowed-down time may not just be “in our heads.”

Does how we show up for a situation in our minds (the conscious product of our brains’ firing neurons) affect our physical experience of the world—in particular, our experience of time?  Just about anyone with a clinical background would say that unusual and unexplainable experiences are in our heads and they’re not real.  But what about instances where the physical evidence controverts that?

There is evidence that experiences of slowed-down time—such as when someone is in grave danger—may not simply be “in our heads.” The reason is this:  Many people have reported an ability to navigate out of harm’s way while in grave danger because they experienced time in slow motion. Like Neo in the Matrix, sometimes this even happens with slow-motion bullets.

Jim, a police chief, recounts a remarkable story of slowed-down time. In 1983, Jim was working as a police officer when he learned of an armed robbery in progress at a local pizza parlor. He arrived to see one of the robbers come out the back door firing a gun at another officer running toward him. As Jim describes it, from that moment time slowed down. By the time he pulled out his gun, time had come to a complete standstill. Pulling the trigger, he felt the unmistakable sensation of slowness. The gun was firing bullets in slow motion as empty casings ejected, also in slow motion. He could feel his right arm and shoulder moving back and forth in slow motion with the kick of the firing gun. Because of the slowed-down time, Jim was easily able to track the movements of the robber and shot him in the leg. Afterward, Jim remembered that not only did time and sound slow down for him, but the sound of the gun firing was also in slow motion. At no time did he feel fear.

That gunfight occurred in a few seconds, so quickly that most people wouldn’t have been able to react in time. It turns out Jim’s experience is not unique. Years ago, another friend named Bill shared with me a similar story. While driving on a California highway at about 80 miles an hour with the traffic, Bill noticed a car on his left in the fast lane. In it, he saw a woman in a car going the same speed.  Turning his head to look ahead on the road, he saw a tire fall off the back of a truck. In slow motion, the tire bounced three times, went through her windshield, and killed her. Meanwhile, because time had slowed down, Bill had all the time in the world to drive to safety. While the other vehicle slowly spun out of control, Bill navigated to the right side of the road and parked. Once again, the entire episode occurred much too quickly for a typical person to react. And at no time did Bill feel fear.

Each of these stories and many others I’ve collected over the years share the same qualities: someone in grave danger, who does not feel fear, experiences time slowing down so dramatically they may be able to save their own lives. Researchers at the University of Iowa College of Medicine have studied this phenomenon over decades, reporting that of the people who had come close to death, more than 70 percent recalled feeling a sense of slowed-down time.[1] Moreover, the speed of subjects’ thinking increased to as much as 100 times the normal rate, events related to the situations they faced were perceived with objectivity and clarity, and because time seemed so expanded, people were able to respond to lightning-fast events with precision and intention.

Theories about why this occurs are numerous. Some suggest it isn’t the actual experience but the memory of the experience that causes the phenomenon of feeling time slow down. Researcher David Eagleman suggests that when we are in what he calls “fear” mode, our brains take in exponentially much more information than normal.[2] We then remember the experience in great detail, suggesting that the feeling of time slowing down is merely the way our brain processes the memory after the fact. Other research theorizes that when humans experience extreme fear, changes to their human “internal clock” results in a perception that time slowed down.[3]

As a longtime follower of the research on how we experience time, and author of a book about it, I disagree. The brain on fear is different from the brain on slowed-down time. Some research suggests that fear begins in the brain and spreads through the body, signaling radical adjustments for defending itself, often called the fight-or-flight reaction.

This is a far cry from reports of slowed down time during grave danger, where physical symptoms go mostly unnoticed by those experiencing it. Moreover, if it were just the memory of the event being recalled in such great detail, then why were people able to navigate to safety in the moment?

Reports of slowed-down time are closer to what some call “flow” or “the zone,” characterized by deep concentration, highly efficient performance, emotional buoyancy, a heightened sense of mastery, a lack of self-consciousness, and even self-transcendence.[4] This suggests there’s more to the story of slowed-down time than biology. Instead, exploring a possible intersection between psychology (not biology) and physics (not classical, but quantum) may be the place to start.

The Good, the Bad and the Unexpected

During the course of each day, we all experience what we call “good” things happening as well as “bad” things happening. But if we take away those labels, we’re really just saying that some experiences are expected, and some are unexpected–and then we call the unexpected events “bad”. And we then go through our days 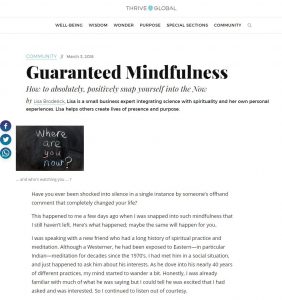 In my article in Arianna Huffington’s new Thrive Global site, I described my own method of mindfulness, guaranteed to work under any conditions and in any setting. Check it out here: https://www.thriveglobal.com/stories/21142-guaranteed-mindfulness 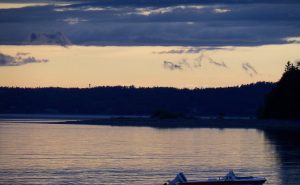 These Are The Days That Must Happen to You

“These are the days that must happen to you.” —Walt Whitman  #IntheNow